I went to see Diary of a Somebody at the Seven Dials Playhouse yesterday and I didn't like it. It is only the second production in a new venue. I liked the theatre and the bar.

A five star review in the Grauniard, and the rest of the run - admittedly only to Saturday - sold out.

This play, pieced together by John Lahr from Orton’s journal as well as from correspondence and interviews, has often been overshadowed by the diaries themselves and by Stephen Frears’ 1987 film Prick Up Your Ears, adapted by Alan Bennett from Lahr’s biography of the same name.

I've seen the film and read the biography, but don't recall an allergic reaction. What went wrong? 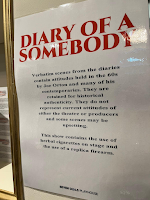 There is a trigger warning on the wall by the box office.

Verbatim scenes from the diaries contain attitudes held in the 60s by Joe Orton and many contemporaries. They are retained for historical authenticity. They do not represent current attitudes of either the theatre or producers and some scenes may be upsetting.

If casual cruelty delivered with an insincere affectation of  cavalier flourish was a thing in the 60s, I think we might be on to something. I am now a generation snowflake shrinking violet who may well need an usher to come and hold his hand  for comfort if anything disturbing happens on stage. The type of milquetoast to be frank (though I shudder at frankness) for whom trigger warnings were invented.

I went to the loo in the interval.  The signs on the doors to both rooms labelled them as gender-inclusive, gender-neutral, mixed-sex, all-gender or summat. I can't remember the exact phrase. I took a deep breath and eeny, meeny, miny, moe'd. Behind the door on the right were two urinals, a cubicle and a couple of sinks. It was just the friggin' Gents with a different sign on the door. I was outraged. What we had was a facility that could process men, maybe, four times as quickly as women promoted as somehow inclusive and anti-discriminatory.

It makes my blood boil. Reactionary snowflake that I am.