Budget purdah, in the United Kingdom, is the period after plans have been prepared but before the Chancellor of the Exchequer's annual budget is announced, when they refrain from discussing any matters which have relevance to the forthcoming budget.

Chancellor of the Exchequer Hugh Dalton resigned after "ma[king] an off-the-cuff remark to a journalist, telling him of some of the tax changes" in the autumn 1947 budget speech

These days there is no such thing as budget purdah, merely budget news management and budget spin. Parts of the statement are selectively trailed, sometimes in the form of leaks to government-supporting newspapers, but more usually through press releases, in the days leading up to the statement. For all that  when I was a Corporate Development Executive I used to have to work late into the night on Budget day working out what the bombs that had been dropped meant for the construction, housing and aggregates industries, government by press release is not an improvement.

(If your memory stretches back further than the 24 hour news cycle you may recall that we have already had a budget in March this year. Don't even get me started on that.)

Helen was in the car when I was driving to to PG's yesterday morning. She was going to do some planting and tidying in his garden while I took him on his weekly grocery shop. As we entered Putney she noticed a sign saying that it was in a new Ultra Low Emission Zone. I had never heard of it but she quickly Googled it on her phone and found it didn't come in until today. I was a bit worried with a car from 2003 that I would have to start paying £12.50 a day for the privilege of taking PG to Waitrose, but she found a page where you could check your vehicle's registration number and I don't.

Here it is as a public service - https://tfl.gov.uk/modes/driving/check-your-vehicle/

On the way back, as we were driving through Wimbledon, she recommended the Buenos Aires Argentine Restaurant, where she had been with Mat recently, and said that Andy Tea recommended the nearby Roxie. Either might be a good place to take Ben so I have tagged their names with their websites for future reference.

In the afternoon I was supposed to take Mia's bike back on the train from Tooting to West Hampstead Thameslink (the St Albans train). Looking for an earlier one than I had planned I couldn't find any service from the station at all. I thought initially that I had gone off my head, but ultimately deduced there was nothing running. There was no notice saying this anywhere on the Thameslink site though. I just had reluctantly to deduce it. How difficult would it have been for them just to put a sentence explaining on the station's page?

Thomas Tuchel said he has been impressed by Callum Hudson-Odoi's recent performances, but wants to see more consistency...

'He had a good game against Malmo, he had another good game today. There are still things to improve and to work on now.

'He needs to show that he is able to produce performances like this consistently and it’s the time now to show that. The next opportunity is on Tuesday.'

That sounds like he'll start again against Southamption in the EFL Cup.

Update: I just watched the highlights on Match of the Day. Callum was unlucky not to be awarded a second that was judged to be an own goal.

ACTUALLY, SANDWORM ATTACKS HAVE ONLY A ONE PERCENT DEATH RATE

Those leftist Atreides weirdos are politicizing sandworm attacks on Dune to control us and keep us in lockdown forever!

Okay, clearly the sandworms are real; I’m not one of those people that allegedly stormed Castle Caladan or anything. But come on, people, open your eyes. It’s just a thirteen-hundred-foot-long worm that lives under the desert of Arrakis that will sneak up on you and eat you alive if you walk outside on the sand, especially if you’re with a big group—in other words, it’s exactly like the common flu!

Did you know it has only a one percent death rate? There have only been seven hundred thousand deaths from sandworm attacks this year, so yeah, barely anyone even dies from them. We need to get back to running those spice mines as soon as possible and stop worrying that mining spice actually attracts the sandworm to that central location. So what, maybe we’ll have a sandworm incident, big deal, what’s the worst that’ll happen?

I'm off to see the new Dune movie later today. Three hundred and forty odd into the 1,001 nights I am interested to see how much of the book's Islamic/Arab/Bedouin influence it retains. 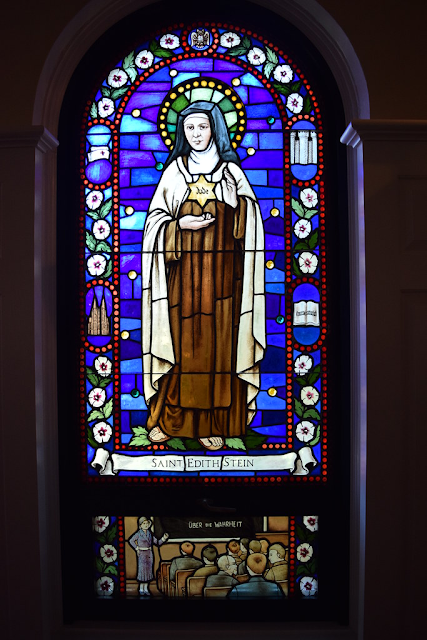 How can it be that I have never heard of Edith Stein before?

Edith Stein (1891–1942) was a realist phenomenologist associated with the Göttingen school and later a Christian metaphysician. She was a Jew who converted to Catholicism in 1922 and was ordained a Carmelite nun in 1933. She died in Auschwitz in 1942. She was subsequently declared a Catholic martyr and saint. She campaigned publicly on issues relating to women’s rights and education. Stein is known philosophically primarily for her phenomenological work on empathy and affectivity, her contributions as research assistant to Edmund Husserl, and her philosophical anthropology. She was in discussion with leading philosophers of her day, including Husserl, Scheler, Heidegger, Conrad-Martius, Ingarden, and Maritain. Her work contains original approaches to empathy, embodiment, the emotions, personhood, collective intentionality, and the nature of the state. In her later work, Stein developed an original philosophy of being and essence that integrated Husserlian phenomenology and Thomist metaphysics.

In Our Time today was about Iris Murdoch. I was astounded to hear Simone Weil get a namecheck. So astounded in fact that I immediately forgot the context in which Miles Leeson had brought her up.

Googling though, I think it must be "attention:"

I have used the word ‘attention’, which I borrow from Simone Weil, to express the idea of a just and loving gaze directed upon an individual reality. I believe this to be the characteristic and proper mark of the moral agent.

It's Audible credits day and, as previously announced I am going to spend this month's subscription on  Awaiting God: A New Translation of Attente De Dieu and Lettre a Un Religieux by Simone Weil. Stop laughing at the back, if you don't like abstruse 20th century quasi-Christian mystics other books are available. (I likes chips, me.)
More and more "free" content is coming along in the Plus Catalogue that John told me about. I must keep an eye on https://www.audible.co.uk/ep/audible-plus-member-benefit
at 8:27 am No comments: 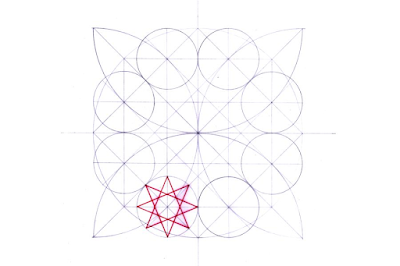 I have booked Ben on to Sacred geometry – new patterns with Tom Bree at West Dean 14 to 16 January 2022 as a Christmas present.

I only mentioned it in passing to him originally to be honest but he is really keen. I am glad I bit the bullet because - as I write - there are only two places left.

It is residential and he will be staying Friday and Saturday night. Also, and to my surprise, he encouraged me to come along as a guest. We will be able to entertain his colleagues with tales of quasi-crystals over dinner. What larks!

A little after eight thirty yesterday morning, I was driving round to Helen's to pick up some plants; she helps PG with his garden but doesn't have a car herself.

I won't say exactly where, but I passed our MP Siobhain walking down the street on her own. On a day when the PM is to lead Commons tributes to David Amess I raise my hat to her.

Stoic chutzpah used to be an oxymoron. She has made it real.

Perhaps I should collate what I have written about her here over the years and email it off to her office as a tribute.

Anything (except Peter) Goes

We went to see Anything Goes' Saturday matinee at the Barbican yesterday. It was terrific. I Get a Kick Out of You, You're the Top,  It's De-Lovely etc. etc.

Mia's flatmate Saskia had the ticket originally slated for PG; end of aisle in case he had to flee. When I told him I had got it he said he couldn't come because the theatre is "hermetically sealed."

"How do you know?" I asked eyebrows raised.

"I directed John Osborne's 'A Patriot for Me' there in the 90s," he replied. Greatest Answer Ever.

He was absolutely right.

Each row of the Barbican Theatre is accessed from either side via its own door, enabling the auditorium to be aisle free. As the lights dim at the beginning of a performance, all the doors close in unison.

I was a trifle freaked out myself and I really don't do anxiety. It was as if Ernst Stavro Blofeld had pressed a button. I half expected “I shall look forward personally to exterminating you, Mr. Bond," to come over the PA.

Reach out and touch it; it is gone

As a rule I wander along to the Royal Standard around six on Friday evenings to raise a glass or two to the end of the working week.

Last night I was somberly reflecting on the murder of Sir David Amess, as I walked past the supermarket in which I have spoken to Siobhain McDonagh, our MP, in order to congratulate her on a speech about the Uyghurs. Waiting for the lights to change at the pedestrian crossing I remember that I have stood next to her there as well. When I got to the pub, I remember that just two years ago (Icons passim) she was there in the garden as well watching Liverpool in the UEFA Champions League.

I must show this to my brother John who is very near to Port Talbot in Margam. You could have knocked me down with a feather. I wonder which pub he broadcast from.
at 6:35 am No comments:

Rebecca's Steve recommended Simone Weil to me the other day. (We were sitting in Ganley's Irish Bar. in Morden, a venue where the topic of Christian mystics can't help come up over a Guinness or two.)

I have found an In Our Time about her from nine years ago here. (Melvyn and guests are always worth listening to and there is a reading list as well.)

I can see that Awaiting God: A New Translation of Attente De Dieu and Lettre a Un Religieux by Simone Weil is available is an eight and a half hour unabridged audiobook narrated by: Rosemary Benson. I will probably add it to the library when my next Audible credit arrived on the 20th.

My cousin Ria's son Bart Lambert went to RADA and opens in Antigone tonight in Chester. https://www.storyhouse.com/event/antigone
Considering I also have a niece in Central and a niece in Guildhall at the moment, a new hashtag is born, our family's #HithertoRecessiveTheatreGene
Did I mention that Peter, Dad's cousin, directed Antigone in the National Theatre with Jane Lapotaire, as I recall, in the title role?
at 8:47 am No comments: