go for the burn

Writing for The Atlantic, Hanna Rosin argues that a preoccupation with safety has stripped modern day childhood of independence, risk taking, and discovery – without making it safer. She travels to a 'anything goes' playground in Wales in search of a better solution.
at 12:38 pm No comments:

A sensible man, when barked at by curs of your type, spits on them and continues on his way.

So bark away, bray, howl, brew your poison; your inability, like that of the toad, to spit beyond your own nose, causing it to fall back on yourself, will succeed in covering but yourself with the poison you would like to sully others with.

The sentence ends with a preposition, but then I imagine it was translated. No one can deny however that the Marquis de Sade had a way with words.
at 12:14 pm No comments:

The woman, who is now 48, said in her evidence today that she thought Mr Clifford was well-endowed and his penis was very large.

“I had only seen one before, I had never seen one in that proximity and that situation,” she said.

When Richard Horwell QC, defending, asked her about the issue, the woman remarked: “I have a small mouth. I do, my dentist has always said…”

This prompted laughter from the jury, which was sent out for a few minutes.

Jurors returned to be told by judge Anthony Leonard QC: “It is inevitable in a case dealing with this sort of graphic detail that members of the jury want to burst out laughing.

“I can remember a very boring court case and we - I wasn't a judge then - became helpless with laughter and the judge had tears in his eyes and it took over 25 minutes to recover.

“But we have got to remember that this is a court of law and we are dealing with serious allegations, and, in fairness to the witness, and the rest of the court, you have got to learn not to react to what's happening. Can I ask you to settle down and remember where you are?”

I know the Max Clifford trial can't go on for ever, but my goodness we should enjoy it while it lasts.

Page 93 of his biography intrigues with "after a year or so the parties mainly took place in a maisonette in Colliers Wood, Surrey, the home of Max's friend Mac McCormick". I'd love to know which maisonette exactly. I think there should be a plaque.
at 11:00 am No comments:

Rutlish's Year 9 rugby team have reached the finals of the County Cup. The Bomber, who is in Year 8, came home yesterday with a letter saying he had been picked for the game. I don't know if he'll start, but it is still quite a vote of confidence. He's the only one from his year who's doing this as far as I know.

That's Saturday. On Sunday he has got his U13 Surrey Development Squad trial. I hope he's not too wiped out from the Cup Final but watcha gonna do?

Also on Saturday, Graveney - (who are in essence Old Ruts U15s) play Altrincham in the NatWest Schools U15 Vase final.

This Is a Generic Brand Video

Everything I learned about marketing in my MBA.
at 9:35 am No comments:

The school had a good run in the national sevens yesterday. They won their group but then got beaten by Orleans Park in the last 32.

Eight tries and seven conversions for the Bomber. Wimbledon College (including Charlie of the Old Ruts) then beat Orleans Park but got knocked out in the last eight today.
at 1:53 pm No comments:

When the boys were 21-0 up on Sunday (two tries for Saadiq, one from the Bomber, and three conversions from Luke) I thought it was in the bag.

In the end they went down 29-28, so that is the chance of promotion blown for this season. One might say that the ref marched the Guildfordians all the way from their touchline to ours with a series of dodgy penalties and that he blew up for full time after the conversion of their push-over try despite saying there were still three minutes on the clock before the kick, but that might be interpreted as sour grapes. We'd still be in with a shout of going up even with a 29-27 win so it was a real kick in the guts.

Onwards and upwards. The school may be followed at the National Sevens today at http://n7.schoolssports.com/fixtures_List.asp?TSID=1850&T=Team&V=201205, and the first kick-off is moments away.
at 10:50 am No comments:

What can I tell you? Ever since Chris Howell tipped me off about Merantau in 2009 (he was working at the same school as the director's brother) the Welsh-helmed Indonesian action move genre has gone from strength to strength.

The reports of my death are greatly exaggerated.

It appears that I have announced the death of Paul's sister prematurely. When he called me to say he had to rush away it turns out that she had "only" greatly worsened, though the prognosis is not good.

I am extremely embarrassed.

In Austin Powers when Mustafa takes an age to expire or in The Quiet Man when the old guy gets up from his death bed to watch the big punch up it is pretty funny. In real life when you have to tell a load of people you've jumped the gun, you feel like a prize chump.

Even by my exalted standards this is a faux pas too far.

While I am on the subject of my own fallibility, I keep forgetting that you get a point for losing a game in the Surrey U13 rugby games. Yesterday's musing on the possible permutations of the nail-biting close to the season may not stand up to close examination.


Here is the latest Surrey U13 Division 2 table. As you can see Reeds Weybridge, the team who beat The Old Ruts last time out can’t be caught as teams only play seven games in the eight member league.

Second place, which also earns promotion to the top tier, is very close between the next three teams; the Ruts, Effingham & Leatherhead, and Guildfordians.

The Ruts play Guildfordians away on Sunday. A win for the home team will give them second place, but a good win for us (that is five points for a win plus a four try bonus) will all but put us in the driving seat as we have a points difference advantage of 30 over Effingham and Leatherhead.

Any other result will mean that the Effingham & Leatherhead versus Guildfordians game in April will decide which of the three teams gets the second promotion place.

The Bomber played for the school in the Surrey Sevens on Monday. They didn’t get out of the group stage, starting slowly - perverse imps that they are - to lose to the team who came last in their first game and then, close but no cigar, beating the team who came first in their last game. Himself got seven of the nine tries they scored overall.

He is playing in the National Schools Sevens in Rosslyn Park on Monday, and then has his Surrey Rugby U13 Development Squad Assessment the following Sunday.

judge nothing before the appointed time

We knew she was ill and it was only a matter of time, but it was still shocking when Paul's sister died yesterday.

He has had to dash off to the family, and I am holding the fort in the office having deferred the jury service I was due to report for on Monday. Hats off to Kingston-upon-Thames Crown Court, who were very helpful with this last minute change.
at 10:44 am No comments:

tasty Beveridge to wash this down?

“I just want to be able to touch my toes without squeezing the life out of my boys.” True dat. Utkatasana is where it kicks in for me.
at 10:04 am No comments:

I am back from a quiet week on the slopes. 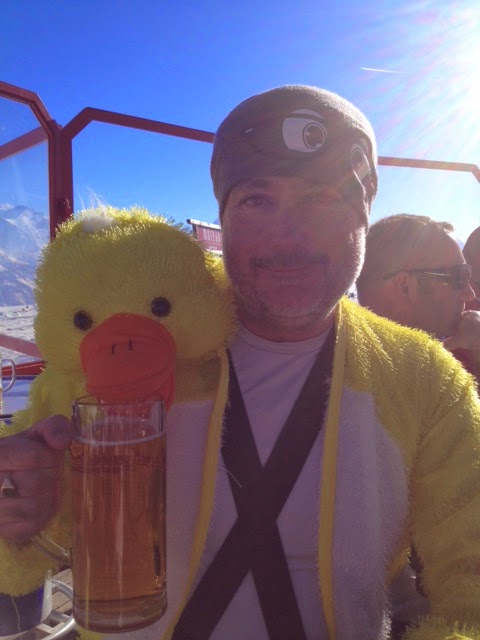 Prodnose: Alright, why a duck?

Myself: (pause) I'm not playing "Ask Me Another," I say that's a viaduct.

Myself: Well, I don't know why a no chicken; I'm a stranger here myself. All I know is that it's a viaduct. You try to cross over there a chicken and you'll find out why a duck.

Prodnose: When I go someplace I just...

I got an email this morning. It said:


You have (or your son has) been nominated by either a school or club coach to attend the Assessment for Surrey Rugby U13 Development Squad.

Initially I was thrilled but on closer inspection it turns out it is the Bomber not me that they are interested in.

I am off to Zell am See to drown my tears skiing, so we will probably be maintaining radio silence here until I get back.
at 10:12 am No comments:

Chantal's funeral is tomorrow. The Burglar's sister is fading after being given the last rites.

Fake it till you make it

Being away skiing for the next two Saturdays I am going to struggle to get my five yoga sessions in this month; dukkha.
at 10:11 am No comments:

The Bomber's school team played in a sevens tournament on Saturday in which they were the runners up, and another yesterday which they won. Last week they beat St Bede's 54-0 in the county cup and they have got a friendly away against the - wonderfully named school - Howard Of Effingham on Thursday.

The club, unfortunately got beaten got beaten 39-19 by Reeds and Weybridge on Sunday, but in a simultaneous upset Camberley U13s (who the Ruts beat earlier this season) walloped Effingham & Leatherhead who beat us (Icons passim) in December.

Thus it is still possible for the boys to come second in the league and get promoted to division one. Herewith the table:
Last Updated: Mar 3 2014 10:41PM
at 11:42 am No comments:

Sometimes referred to as open E or open D tuning, Vestapol (or Vastapol/Sebastapol) is perhaps better viewed in terms of the relationship of the strings to the root pitch on the 6th string:

The root, 3rd and 5th are the notes of the major scale that make up the root major chord for whatever key you are playing in: in E, they would be E, G# and B. So if you are tuned to Vestapol in E, playing the open strings will sound an E major chord. The pitches you are tuned to - EBEG#BE - are actually the same as an E chord in standard tuning. If you tune to D, the strings are tuned DADF#AD. Whatever pitch you tune to, the relationship between the strings will always stay the same: R5R35R.

What makes Vestapol convenient as a name for the tuning is the lack of confusion between the actual key the song might sound in and the relationship of the intervals between strings in the tuning. Charley Patton, for instance, plays "Spoonful" in Vestapol at E, or in other words, open E tuning. Furry Lewis plays the slide piece "Falling Down Blues" in Vestapol, but pitched at D, so open D. Josh White plays in Vestapol on songs like Jesus Gonna Make Up My Dyin' Bed, but his guitar is pitched low at C. It's all Vestapol.

Not just the name of the place where there is all that aggravation in the Ukraine then. The way that language evolves is strange indeed.
at 10:00 am No comments:

Time to start tuning up for England v Wales a week today. I'll be skiing in Austria, so I'll have to find somewhere to see it in Zell am See.
at 6:42 am No comments: