1968 was the year of student protests across the globe, and riots in the streets of Paris. Assassinations rocked America and Soviet Tanks crushed the Prague Spring. Sexual liberation, civil rights, drugs and music were said to shape the thinking of a generation.

I think there are a lot of parallels with 2020.

Reading List: Miami and the Siege of Chicago: An Informal History of the Republican and Democratic Conventions of 1968 by Norman Mailer.

I am off to Kevin's birthday party in Richmond this afternoon. He's lived mostly in Hong Kong for decades, but he has been in London at this time of year once before.

I can distinctly remember listening to commentary on the radio in the car while we were driving over, because England beat Germany 5-1 at football; a rare event.

On a whim I googled the game. It was in 2001, 19 years ago! Man I am getting old. I wouldn't have put the elapsed time in double figures.

I live in Marlborough Road. I was driving to work along Colliers Wood HIgh Street yesterday when I heard an ambulance siren behind me. I had previously imagined it might be impossible to let one past given the crazy changes that have been made to the road. Now I know it is impossible. I was furious and frustrated, God knows how drivers, paramedics and patients feel. In particular the posts on the outside of the bicycle lanes mean that the road has been narrowed to the extent that you simply can't get out of the way to let the emergency services past.
at 3:26 pm No comments:

We all remember Dad's birthday, but it turned out yesterday that we were hazy on his year of birth; datum required for for filling in a form. I teased it out (1933) by looking at my Ancestry.com family tree. Let's just meditate for a moment on how odd it is that I reached for that as a reference.

Last Night of the Poms

Another suggestion, after yesterday, for the BBC.  "This one will run and run," Fergus Cashin.
at 9:28 am No comments:

Last Night Of The Bongs

Cool Britannia
Britannia  you are cool (take a trip)
Britains ever ever ever shall be hip
Viv had the answer to the "racist" Rule Britannia at the Proms controversy as well as so much else. He should have been Prime Minister. I could have coped with life under Stanshallism.
at 6:07 am No comments:

I was thinking about a monologue Mia wrote about her grandfather in his chair, and remembered that Viv Stanshall has also staked out a claim in this area.

Now he sits and has

Every comfort and sits

With a washable cover

Yet it niggles him

That his life has gone by

So he says to his son.

I don't want to think

I'm not paid to think

But it worries me

How can I convey?

Judging Books by Their Covers

In 1964 the Nobel-prize physicist Richard P. Feynman served on the State of California's Curriculum Commission and saw how the Commission chose math textbooks for use in California's public schools. In his acerbic memoir of that experience, titled "Judging Books by Their Covers," Feynman analyzed the Commission's idiotic method of evaluating books, and described some of the tactics employed by schoolbook salesmen who wanted the Commission to adopt their shoddy products. "Judging Books by Their Covers" appeared as a chapter in "Surely You're Joking, Mr. Feynman!" – Feynman's autobiographical book that was published in 1985 by W.W. Norton & Company. This essay is reprinted here for your enjoyment. (His title is motivated by the fact that one publisher sent California multiple copies of a "textbook" consisting entirely of blank pages. It was given high marks.)

You may want to compare and contrast evaluating blank text books with arguing about the grades kids got for exams that they didn't take.

I think I wrote well today. It is just that none of it suitable for a weblog.

An actor, huh? Just remember never let anyone catch you at it.

Mia as been accepted into the acting BA at the Royal Central School of Speech and Drama. You know, the place where Larry Olivier and "Judo" Dench went. We are all beside ourselves.
at 7:26 am No comments:

I have never really had much time for Hemingway but I stumbled on this and it is good stuff.

YouTube's recommendation algorithm tugged on my sleeve concerning the In Our Time episode about Proust yesterday, and I listened to it as À la recherche du temps perdu had come up in the morning when I was talking to Peter and I had been forced to admit that  (apart from madeleine cakes) I knew practically nothing about it at all.

I learned from Melvyn and guests that the first part of the first book goes on and on and on about our protagonist not being able to get to sleep.

I never have any trouble getting to sleep. (Is a somniac the opposite of an insomniac?)

It has struck me that if I buy the Audible version, I can start to listen to it when I go to bed and never get past the Overture because I always nod off.

Eat your heart out Borges!

Let it rain, I hydroplane in the bank

I finished series 2 of The Umbrella Academy yesterday. Good stuff. I was quite taken with the soundtrack and found that Netflix have actually put it up on Spottily as a playlist.
at 7:15 am No comments: 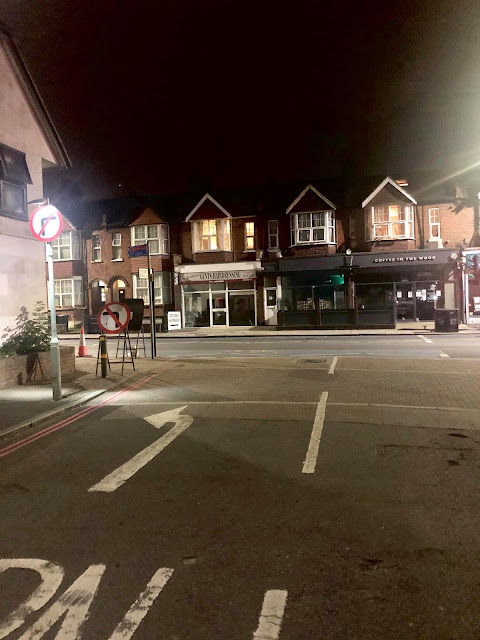 Colliers Wood opposite CITW. Life in 2020 encapsulated in a single image.

Once in a while I follow a YouTube recommendation to something I wouldn't usually watch. That is what happened with the video above.

John Hay was President Lincoln's personal secretary, a position that began nearly five decades of public service. A diplomat who served multiple Administrations from Lincoln to Roosevelt, he was a central figure in defining the U.S. foreign policy.

He was also, it emerges in the show, a folksy poet and the author of "Jim Bludso of the Prairie Belle" which my Dad used to read to me when I was a little boy (Icons passim).

Wanting to find out how deep the ocean is, I dissolve walking into it

Cease practice based
On intellectual understanding,
Pursuing words and
Following after speech.
Learn the backward
Step that turns
Your light inward
To illuminate within.
Body and mind of themselves
Will drop away
And your original face will be manifest.

The country is transfixed today about the results of A level exams that weren't taken.
at 1:28 pm No comments:

I have had to dig this up as the Yale course doesn't seem to cover these chapters at all.
at 8:50 am No comments:

Helen sent me this link to an episode of Black Music In Europe yesterday knowing that I would in interested in the section on Cardiff.

I haven't listened yet but I have explored sufficiently to know that the part about the bay starts about 11 minutes 40 in.

Callum started for Chelsea yesterday for the first time in a whille and was unlucky to have this screamer disallowed.
at 7:42 am No comments:

1. Fights. Blood was spilled at the Mills last night. I was unsurprised as I had noticed the perpetrators snorting that which they shouldn't in the gents earlier. I tipped the wink to John the guvnor who tipped the wink to security in turn, who came down on it pretty quickly when things got real.

2. Refugees. It rumoured that the council are putting a lot of asylum seekers up. A lot of people seem anxious about this. I am sanguine. They have to stay somewhere.

No doubt items 3 through 15 of my Must-Have Items for an Edgy, Rocker-Chic Wardrobe will follow, but fights and refugees is a good start.

We ended up here last night after the Claude closed.

It was was built around 1780, and the castellations were added in the 1830s.
A stone's throw from Albany Road; I had no idea it existed until yesterday.
at 7:24 am No comments:

What the L was that?

Ben passed his driving test this morning. it had been long delayed specifically by COVID-19, but also by one-thing=and=another in general.
His instructor being in the long ago pre-lockdown rear mirror, we hired a car from https://dtcuk.co/driving_car_hire/morden/ and he also had a two hour lesson with the same crew before the test. He doesn't think he could have done it without them so I am happy to share the love.
at 4:43 pm No comments:

I need a mask.
I can buy a mask in a shop.
I can't go into a shop unless I have a mask.


There was only one catch and that was Catch-22, which specified that a concern for one's safety in the face of dangers that were real and immediate was the process of a rational mind. Orr was crazy and could be grounded. All he had to do was ask; and as soon as he did, he would no longer be crazy and would have to fly more missions. Orr would be crazy to fly more missions and sane if he didn't, but if he was sane he had to fly them. If he flew them he was crazy and didn't have to; but if he didn't want to he was sane and had to. Yossarian was moved very deeply by the absolute simplicity of this clause of Catch-22 and let out a respectful whistle.

No one will understand this post but me and my brother John. "We'll always have New Orleans."
at 6:34 pm No comments:

Do you like good music? That sweet soul music.

The latest version of BBC Radio's Soul Music (may its tribe increase!) is about Gloria Gaynor's "I will survive."

We learn that in 1978, when she recorded the song,  Gaynor was, in fact, wearing a medical brace following emergency surgery on her back after an accident that could have left her paralysed for life. “I’d been on stage and fallen backwards over a monitor and ended up in hospital."

This is totally amazing to me. Phil played bass on a tour with her in the 80s. As a rule he stands to the left of the drummer so he can lock in to the tempo from the high hat, On this occasion though he gradually found himself (and not in a weird way) drifting away from his station and taking the time from her shaking her booty.

This was after 1978 surgery to remove a ruptured disc and fuse two of the vertebrae in her lower spine, but before she went under the knife again in 1997 to correct the spinal stenosis caused by the initial operation. Two more procedures followed in 2018.

Perhaps subconsciously triggered by today's FA Cup final, a memory of Callum coming around to my house and watching Shaolin Soccer on DVD with Ben years ago when they were still in primary school.

I think it explains a lot about his style.