Kevin was talking to me about the smart meter roll out on Friday. It sounds like a fiasco but I am late to the party.

This Commons briefing paper may let me start to get my head around it.
at 10:34 am No comments:

I'm having the car serviced before Saturday's jaunt to France for a week.

That explains why I have had to keep topping up the coolant lately. Better to catch it here at home that try and figure it out on an Autoroute lay-by.
at 11:25 am No comments:

Where it all began

Before the Tour de France.
at 8:39 pm No comments:

Songs of the Border

Tonight at 9pm on BBC4, "against the backdrop of President Trump's much-trumpeted wall, Reginald D Hunter takes a 2,000-mile road trip along the US-Mexico border to explore how romance and reality play out musically where third-world Mexico meets first-world USA on this broken road to the American dream."

That looks like a must-watch, his Songs of the South series (see Icons passim) was terrific.

"Extreme and prolonged" high temperatures are being blamed for cross-Channel rail passengers facing more disruption.
Eurotunnel is warning of delays of about two hours at its terminal near Folkestone in Kent.
On Thursday there were reported delays of more than five hours in 30C heat, caused by air conditioning problems on Eurotunnel's trains.

Fingers crossed that this will be sorted out before we have to get it Saurday week.
at 1:35 pm No comments:

Open Mike at the Sultan tonight

Myself: How many songs had I already killed? There were those six that I knew about for sure. Close enough to blow their last chorus in my face. But this time, it was an Elton John and a classic. That wasn't supposed to make any difference to me, but it did.
at 9:36 am No comments:

The seller says, "Our agent, Eric Easton, who also managed the Rolling Stones, asked us to do a demo so he could try and get us an audition at Decca.

"So in early 1963 I booked into RG Jones' small studio in Morden. In preparation for the demo, David and our guitarist Neville Wills wrote two to three songs."

Intrigued by Morden being round the corner I looked RG Jones up - http://rgjones.co.uk.

The Rolling Stones, Tom Jones, Yardbirds, Eric Clapton, David Bowie, Springfields, Englebert Humperdink and The Bee Gees all recorder in Morden as well. Then in 1968 RG decided to move the legendary studio to Central Wimbledon and the building in Morden was destroyed to make way for Merton College.

I think in RG I have discovered a new Welsh Born Icon.

Ronald Geoffrey Jones was born in Caerphilly in South Wales. From an early age he loved designing and building gadgets. Entirely self-taught, he was equally skilled at carpentry and metalwork and was very quickly able to construct a power amplifier and other pieces of electronic equipment. 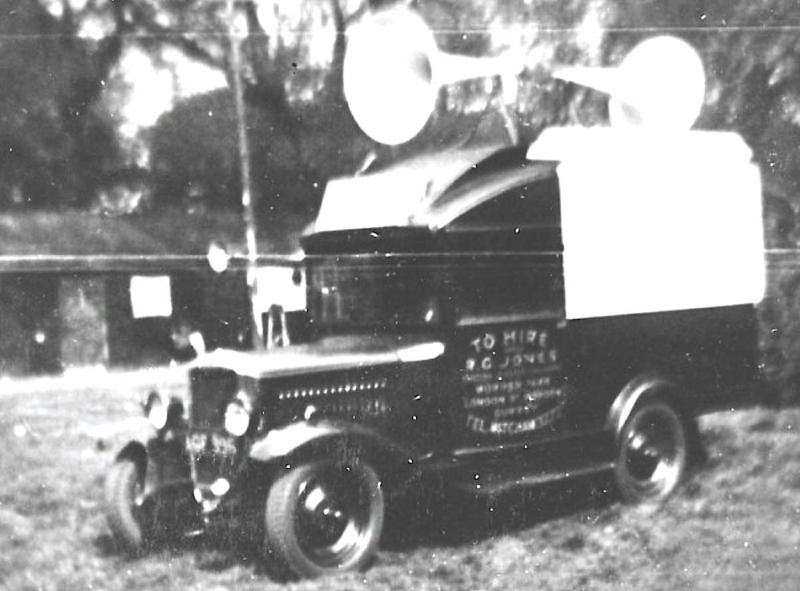 Known as Geoff, Reg or RG, his first job on leaving school was for a company called Milton. He became a salesman for the company and from a caravan, in which he also lived, he sold his wares in town markets all around Wales. Getting himself heard above the other market traders was hard work and he soon began to turn his mind again to electronically amplified sound. Totally undaunted by his lack of training in electronics, he procured all the necessary components and had soon assembled a system. Two large horn loudspeakers, the flares constructed entirely by him out of bits of timber, were mounted on top of the car which towed his caravan. Inside, he installed a microphone connected to an amplifier powered by four twelve volt batteries and a rotary (48V to 230V) convertor. It worked! The young RG Jones was now able to advertise himself effortlessly to the crowds giving him a distinct advantage over the other retailers. Such was the success of his enterprise that his employers asked him to build a further fifteen more systems to equip the rest of the Milton force. So by the tender age of just eighteen, the same year Queen Elizabeth II was born, with the BBC just barely formed and Stalin just in power, the young RG Jones went into business for himself.

THE WIZARD OF OD

ofo (/ˈoʊfoʊ/) is a Beijing-based bicycle sharing company founded in 2014. It operates over 10 million yellow bicycles in 250 cities and 20 countries, as of 2017. The dockless system uses its smartphone app to unlock and locate nearby bicycles, charging an hourly rate for use.
As of 2018, the company is valued at up to $2 billion and has over 62.7 million monthly active users

I noticed two ofo bikes outside the office on my way in today. Maybe I'll ride on home on Thursday, when I tend to be here without the car.

Never heard of it before this morning.

How we live now (the week after next)

The decadence that was Imperial Rome

I have been out two evenings in a row.

Thursday I went to see The Happy Prince at the HMV Curzon, and Friday, Danny Baker at the Hawth theatre in Crawley.

There's a Hamlet on in the Colour House Theatre at the Mills at the moment. The New Stagers - an amateur company are putting it on.

Normally I'd go but this year I am all but Hamletted out.
at 4:28 pm No comments:

Geraint Thomas won stage 11 of the Tour de France to take overall lead and wear the yellow jersey, but Sam Warburton has retired from rugby; body just not up to the strain of it any more.

Thomas is two years older than Warburton, which perhaps shows you the trauma professional rugby inflicts these days.

These two Welsh greats attended Whitchurch High School is Cardiff at the same time, along with a certain Gareth Bale. I always find this astounding.
at 10:02 am No comments:

Lend me your eras

It's the end of an era in Welsh rugby.@PontypoolRFC are saying goodbye to Pontypool Park - a ground full of history 👀 pic.twitter.com/99WyWCRo9N
— BBC ScrumV (@BBCScrumV) July 17, 2018

David Bishop and Mark Ring feature prominently.
at 11:25 am No comments:

We came second in the Antelope Quiz last night. Not too bad after the World Cup lay off when it was cancelled.

Hot Pod for my Dad Bod

I will be away on holiday that week, but it is always good to have another hot yoga option nearer home.
at 5:25 pm No comments:

Worth watching as I am reading 1599: A Year in the Life of William Shakespeare?
at 11:03 am No comments:

Love On A Budget


Girl, you know I would do whatever it takes to make all your fantasies come true. I would cross a continent. I would cross an ocean. I would even tunnel to the center of the Earth just so I could find that one perfect gemstone, lobster, or ball of lava that would turn an ordinary night into an evening of ultimate perfection.

However, things are tight financially right now due to some unexpected expenses after I turned my apartment’s color scheme from scarlet red to ivory white with pops of violet. I think we can both agree my penthouse is seriously bumpin’. Yet the fact remains I don’t have as much liquid cash on hand as I would like.

I also made some poor investments.

This in no way means I will not please that booty. Instead, it means that there will have to be some regrettable but necessary cutbacks to our evening. Do not believe for one second that you will not feel like a queen. You will simply feel like a queen of a less prosperous country.

You know time are hard when even Smoove is suffering.
at 10:12 am No comments:

We are at a table at the Dairy, a highly regarded restaurant in Clapham, south London, which is decorated in bucolic style to match its natural ingredients including vegetables grown on its rooftop.

It is a deceptively simple query, like others he later lobs at me during our meal. Lanchester’s most recent books – his 2012 state-of-London novel Capital, his 2010 account of the financial crisis, Whoops! and his new book, a tongue-in-cheek lexicon called How to Speak Money – relate to finance and the societal distortions it has created. But his first novel, The Debt to Pleasure (1996) was a Nabokovian mystery written in the form of a cookbook by Tarquin Winot, a prickly intellectual snob.

My car's engine once burst into flames on the M4 while I was listening to an audio book version (narrated by Richard E. Grant) of John Lanchester's The Debt to Pleasure. I haven't taken it personally however. I am still a fan so I was pleased to see that he eats at the Dairy (see Icons passim) the place in London I took my brother for his first ever tasting menu experience.


It’s properly good here. It’s where René Redzepi [head chef and co-owner of the Copenhagen restaurant Noma] ate when he was in town.”

The Bikram Yoga Guy is Crazy

After last night's boozy disappointment with England going out of the World Cup, I woke with a "gentleman's head."

A head so gentlemanly it prevented me getting to my traditional Thursday 6:30 a.m. Bikram Yoga class.

Here, but way of a scold to get myself back on track, is Joe Rogan sounding off to a Nigerian/Kiwi MMA fighter (but of course) on why we all need to keep our Bikram up and running; flaws notwithstanding.

At 8:05 on Sunday in Latitude's Cabaret Theatre: ten years on from their triumph at the Colour House Theatre (see Icons passim) the Award-Winning and world-touring Action To The Word present the world-premiere of their gig-theatre take on the most famous tragedy of all time – Sophocles’ Oedipus Rex.
at 9:56 am No comments:

I am going to miss the wrestling at the Mills on Sunday as I will be home in Cardiff. Into each life a little rain must fall I suppose.
at 10:32 am No comments:

AS Monaco are pursuing a deal for Chelsea's Callum Hudson-Odoi, but have been quoted a price higher than what they paid for 16-year-old forward Willem Geubbels (€20m), according to RMC.
— Get French Football News (@GFFN) July 6, 2018

Well I never. 20 million, 20 million there; before you know it you are talking about a lot of money.
at 9:22 am No comments:

Ben is supporting England against Sweden in the World Cup this afternoon. Back in 2012 however (see Icons passim) when Ibrahimovic scored all four goals as Sweden beat England 4-2, he was keen to stress he is a quarter Swedish on his mother's side.
at 8:00 am No comments:


As a devolved issue in Wales, and as an idea that was born here, the idea of a free health service for all serves as a beacon of what we can achieve as a nation and is something we must pass on intact to future generations.

Tickets will go on general release from Thursday 19 July.

I think I fancy:

Wherever I hang my hat

I was watching the game while falling behind dealing out burgers at the Standard, but this is what the win looked like at the Apprentice under the office.
at 10:29 am No comments:

No one can accuse the Colliers Wood Residents Association of getting carried away with England World Cup fever.
at 11:07 am No comments:

I will be supporting Russia against Spain in the World  Cup this afternoon.

Two years ago in the Euros, Russia - with nominal "home" advantage - Russia agreed to let us wear our iconic red jerseys while they wore their white away kit.

That was classy. It has changed my view of the world. I can no longer imagine them as the Machiavellian villains our press tell us they are.