The Scorpion and the Frog

PG, the Butlers and I went for a lunchtime pizza at Pappa Ciccia, just over Putney Bridge in Fulham Palace Road the other Saturday. I was supposed to be calling on him in Hammersmith on my way back to Cardiff, and they had been doing something on the river that morning.

As we were sitting around the table, I noticed a big yellow egg of a bruise under the cap sleeve of Mat's t-shirt.

Tom is his son; a boy in his early teens. 'Serves you right for sending him to Karate as soon as he was weaned and out of nappies,' I thought. My sleeve? I was laughing up it.

Back in Cardiff this weekend, in the front room of mum and dad's empty house, I had a flashback. Ben did muay Thai, not Karate from a young age.

Here he is in an exhibition from 2008 with his Kru (teacher) Johnny Boon. Notice that Johnny has a pad on his right arm.  The next time we went back to Cardiff I "took the knee" as Boony does in the picture and invited Ben to demonstrate the technique to his grandparents. I had no pad. He duly obliged, leapt onto my right thigh and delivered the Sok Tong (downward elbow chop) to the crown of my head. Sufficient to say that in the UFC this type of blow, referred to as the ’12 to 6′ elbow because of the straight downward motion - as it would be on a clock face - is not allowed as it is considered too dangerous. Never mind Mat's bruise, I was actually knocked out for several seconds. When I came round, mum and dad were praising and hugging Ben and I knew my work was done. 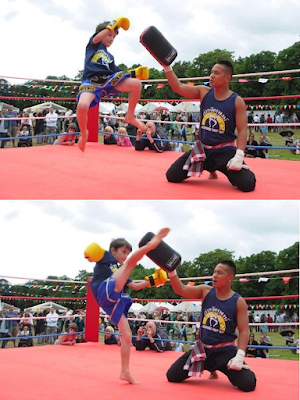