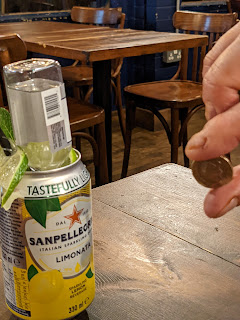 When I arrived outside the Druid's Head in Kingston last night - on my way to catch up inside with old Whitton/skiing friends who I probably haven't seen since 2019 what with COVD 'n all - I noticed I sign for a place called Poor Boys that was just down an alleyway off the Marketplace. From Breakfast and Brennan's to dinner at Dukey Chase's I am all over N'Awlins food so I was intrigued, and when Hugh suggested after a few beers that we ate there he was pushing on an open door.

Very disappointed though. The food was served up in boxes in bags at the table as it it was a take-away delivery, and we had to ask them for cutlery, plates and napkins. As for the drinks, the glass of red wine I asked for arrived in a can. You can see what Hugh got served up on the right. All a bit infra dig when you are paying top dollar.

I promise you I know what eating in New Orleans is like all the way up from a Ma & Pa shack to the fine dining legends. And it ain't like that.