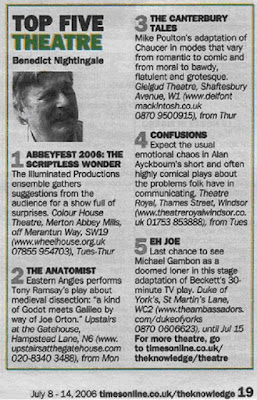 I've set up a Facebook group for AbbeyFest, and associated some of the shows that are being put on as part of it as Facebook events, as I'm trying to get the hang of how the system might be used to help promote the Colour House Theatre.
I went to see "James Dean is Dead" earlier this week. It was pretty good, but it is difficult to be objective about it because Peter introduced me to Jackie Skarvellis and James Weisz (the writer/director, and the performer) and I had a chat with them before the show. Go figure.
When I googled the title, I found a listing of the Abbey Mills performance on the New York Times website! The link went here, it is blank now as the show has closed but that is one of the weirdest things I've ever seen on the 'net.
Speaking of weirdness, "The Scriptless Wonder" is on next week. When it played last year it was the Sunday Times's number one recommendation, while Sir Michael Gambon in a play by the Nobel Laureate Samuel Beckett cam in fifth. Again, go figure.
at 12:21 pm