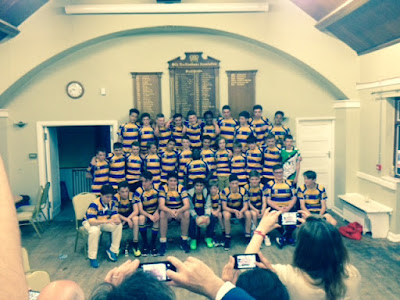 The Old Ruts rugby awards returned last night. When the Bomber arrived it looked like some of the squad were prostrating themselves before him as if  he was an oriental potentate. This it turns out was so they could get a better view of training shoes unavailable in the UK that he had brought back from New York and the wonder of which continues to elude me. He won an award which seemed to be something along the lines of "best player on day 2 of the Wales tour." (That's enough awards. Ed).

If that is not enough excitement for one weekend, I am going to see Jim Dale at the Vaudeville Theatre tonight.


The snail is on the thorn. The lark is on the wing. The hat is on the side of my head. The rainbow is around my shoulder and everything's for the best in this best of all possible worlds where every prospect pleases and only man is vile.