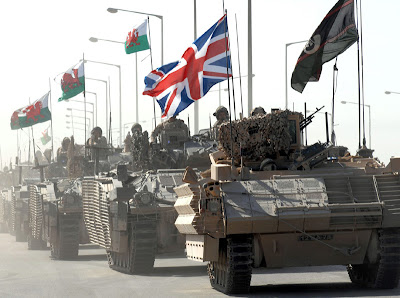 I couldn't help but be struck by the MOD photograph above when it appeared on the front page of several UK national newspapers yesterday. Why are the three Welsh flags flying so prominently? It must be because they are Welsh troops, but it is surprisingly difficult to find out online. All I can establish is that soldiers from the 4 Rifles Battlegroup moved from Basra Palace to the Contingency Operating Base at Basra Airport.

This for some reason has become the straw that broke the camel's back for me. I've suddenly realised that I have no idea whatsoever what we are about in Iraq.
Here's Brendan O'Neil's opinion from SPIKED. Read the whole thing. It is dispiriting but convincing.

The British troop withdrawal from Basra has both been hailed as a victory and described as a defeat. For the UK tabloid the Sun, the movement of 600 soldiers from Basra palace to a British airbase 10 miles outside of Basra is an ‘historic moment’. It has taken ‘guts, skill and determination’, says the Sun, to reach a point where the British can ‘hand the city back to the Iraqis’. Yet for the Daily Mail, the withdrawal is an ‘ignominious defeat’ and a ‘sad day in our military history'.

So, which is it: a memorable or shameful moment for the Brits?

It’s neither. The withdrawal is better understood as a tightly-controlled PR stunt designed to make the British elite’s lack of political will for staying in Iraq look like something more meaningful.

I can't help but wonder how "a tightly-controlled PR stunt" and the fact that I as a British subject haven't got a clue what's going on relate to the MOD's new gagging rules, which state:

Members of the Armed Forces and MOD Civil Servants must seek prior permission from MoD media authorities] if they wish to communicate about defence via books, articles or academic papers; self-publish via a blog, podcast or other shared text, audio or video; take part in external questionnaires, polls, surveys or research projects, speak at conferences, private engagements or other events where the public or media may be present; or contribute to any online community or share information such as a bulletin board, wiki, online social network, or multi-player game...

[This] covers all public speaking, writing or other communications, including via the internet and other sharing technologies, on issues arising from an individual's official business or experience, whether on-duty, off-duty or in spare time.

I for one, would like to be able to hear what the boys on the ground think.
at 11:25 am

Looking again, I see 4, but the rhetorical point is the same.