The food was top notch in Seville. (Also Helen was good enough to tell us in advance that 'Calle Argote de Molina is the street near the Cathédral that has some good restaurants' and that steer did us the power of good when we first arrived, late at night, tired and hungry. We weren't let down.)

Let's see if I can't return the favour by working out the places we patronised from my Google timeline and a pocket full of receipts. 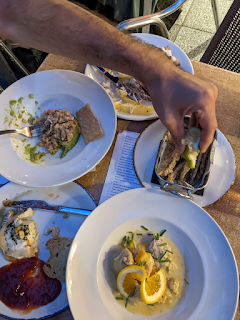 We sent the Decameron group (don't ask) the image on the right in WhatsApp after dinner that first evening, captioning it "tapas at the restaurant you recommended." I need to correct that. She had written of the Calle Argote de Molina restaurants. "We went to the one with the red awnings (La Subasta?)" In fact our party were at Antigüedades Bar de Tapas which also has red awnings. La Subasta is on the other side of the road seven meters away if Google Maps is anything to go by.

Ben whose arm is in the picture squeezing lemon on fried fish was very taken with the tartar de salmón which is in the picture at 10 o'clock. Here is a recipe from Lidl's Spanish website. (Is it snobbish to find that funny?)

We had lunch both days at Casa de Gula (C. Álvarez Quintero, 9, 41004 Sevilla.) Returning the second time because their tartar de tomate served with smallish oblong slices of deep fried bread was a big favourite with the Bomber. Here is Albert Adrià's recipe. I had to include it because it contains: 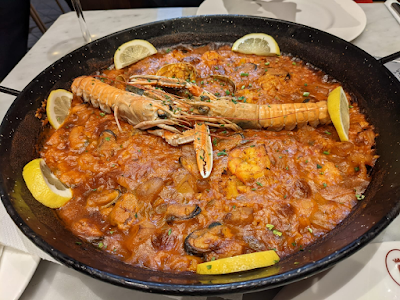 Saturday's dinner was at Casa Robles, a massive 61m from Friday's. Seafood paella para dos por favor as my Spanish started to revive. Good stuff; the food that is not my mangling of the language.

Late afternoon Sunday we got fueled at Casa Manolo, in the Plaza de la Alfalfa just up from the hotel. Of the two of us, I knew it the best. The Bomber not being a great one for springing from his bed full of the joys of spring I had got used to having a contemplative coffee or two there of a morning while he festered on his mattress with his head under the pillow.

Entrecot ternera for him, fritura variada for me. Then off to the airport and back to Blighty to forget what the words italicized in the last sentence mean.