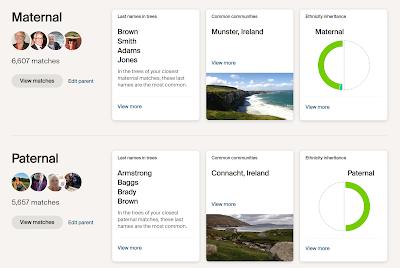 There's a new BETA feature in AncestryDNA that bifurcates your matches between "Parent 1" and "Parent 2" but which is mummy and which is daddy?

Almost everyone I have bought a test for is either a child, a nephew or a niece of mine and thus related to me on "Both sides" of my family a classification that, on first glance, made me shudder until I realised that my son and his cousins are - OF COURSE! - descended from both my mother and my father.

This is where Peter rode to the rescue, his mother being my paternal grandfather's sister. Quod erat demonstrandum? He is related to me by Parent 2, who is thus daddy; similarly Parent 1 is mummy. Further my 2% Scottish is from Mum; Dad 100% bogtrotter.

Piece of cake though for the next generation to work it out. The son and heir just needs to look up which side said cousins are on, the cousins in turn - the side that I am on.