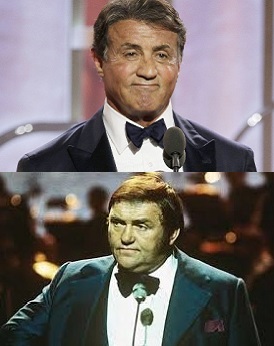 Adonis Johnson never knew his famous father, boxing champion Apollo Creed, who died before Adonis was born. However, boxing is in his blood, so he seeks out Rocky Balboa and asks the retired champ to be his trainer. Rocky sees much of Apollo in Adonis, and agrees to mentor him, even as he battles an opponent deadlier than any in the ring. With Rocky's help, Adonis soon gets a title shot, but whether he has the true heart of a fighter remains to be seen.

Rocky completist I am, but I won't be able to catch it until next week as I am driving to Cardiff after work.

I had sworn never to watch The Jonathan Ross Show ever again, but if Sly Stallone can be persuaded to do his Les Dawson impression when he appears on it promoting the movie on Saturday I will break my vow and tune in.
at 8:00 am