There has been an awakening. Have you felt it? 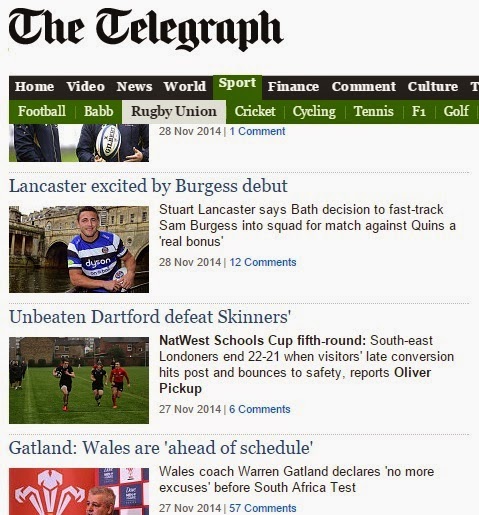 If you look at the Telegraph online today you will see a report on the fifth round of the NatWest Cup nestled between Stuart Lancaster's thoughts on Sam Burgess's potential debut for Bath tonight and Warren Gatland's musings ahead of Wales' game against South Africa tomorrow.

The last two paragraphs on the NatWest cup are as follows:

At under-15 level the story of the round involved Rutlish, a comprehensive in south-west London which only started playing rugby four years ago. They managed to defeat a school with a mighty rugby pedigree in Hampton. They won 21-17, with scores from hooker Sonny-Bryant-Winning, lock Diell Zejunhlla and wing Khush Akhtar.


Liam Shanaham, head of rugby, said: "We are due to play RGS Guildford or Brighton College away in the next round, and with regards to expectations the boys have overachieved getting this far. As a state school who only train once a week with no compulsory games afternoons, so they have performed outstanding."

Regular readers will know that the Bomber played in the Rutlish game even though he is a year below in school.

Looking at the tea leaves on the Schools ruby website, Hampton School - who the boys beat in round 5 - beat RGS, Guildford 29-5 away earlier in the season, and Brighton beat Reeds School 35-21 in September but Rutlish put Reeds out of the Cup in round 2 by 42-17. There's not a lot of difference in the latter but we may dare to dream.
at 12:15 pm