Anything for a quiet life 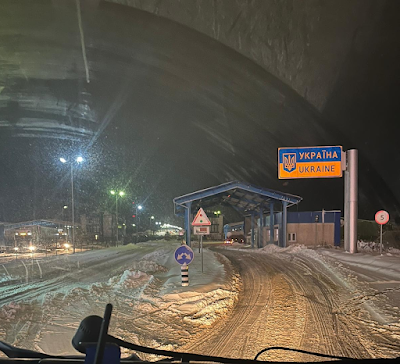 Jone (Icons passim) has delivered his fire truck from Norway to Ukraine. The shot on the right is taken from its cab at the border,
There is another photo encypted in WhasApp that has the caption "This Norwegian is a paramedic at the front line. Came to receive the ambulances and medical supplies we brought." Probably best not to publish that in public I guess and risk him being identified.
I'm really impressed by this and that is generally not my style at all. I'm going to meet the son and heir after work in the Standard for a swift half after work tonight before going next door but one to Corleone for our semi regular pizzas. Then on Thursday I am going to the theatre (Icons passim). These two trips represent more than enough excitement for a week from my point of view. 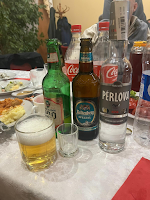 I imagine he is back in Poland now. "Now we celebrate," he writes under the photo of bottles and glasses to the right. He has earned it.
He says he will be back in the Standard on Friday evening. That should be a good night. We will also be saying good bye to the Hendries until after Christmas as they are flying off to New Zealand on Saturday.