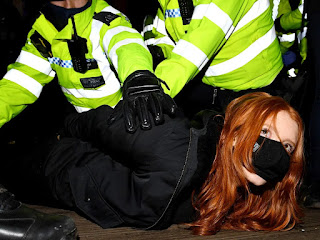 Nobody, surely, can dispute that I am a raging right wing nut job who thinks that life was better when the newsreels were in back and white, but the High Court judgement yesterday that the Met breached the rights of vigil organisers after Sarah Everard's murder gets two thumbs up from me. Herewith the Grauniard's coverage.

Initially, and briefly, I imagined this was criticism of the heavy handed break up of the "unofficial" vigil itself but no such luck. I remember, when it happened, being ashamed to be living in a country where the police were brutalizing women (what was the pretext, COVID?) in public in a park twenty odd minutes from my house.

It seems to me that we have sleep walked into a situation where the state arrogates* all sorts of arbitrary powers to itself without even a fig leaf of due process or appeal.

Take, for example, the fall out for Chelsea FC from the Government's sanctioning of Abramovich. The government's "special license" has set a limit of £20,000 per team per game for travel to and from matches. Where on earth has this figure come from? One can't but suspect it has simply been pulled out of the air. How is it to be challenged or justified. Government by diktat?

I have dug up the Law Society Guidance on the UK sanctions regime, but I haven't read it yet. The Cretan needs feeding and I have to dash out of the door for my yoga class.

* an earlier version of this post said "abrogates," but I am blessed with pedants as readers. Well one in particular.