Blow, winds, and crack your cheeks! 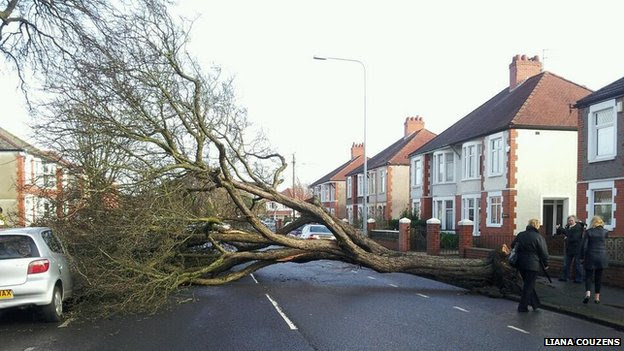 I am going to head off down the M4 to Cardiff later this afternoon. The photo above is from the BBC and of the street where my sister lives.

You can see the current Severn Bridge status at http://www.severnbridge.co.uk/bridge_status.shtml. Fingers crossed it stays open.

I don't really get many chances to get to the home town in the rugby season as I am generally involved (at least in theory so far in 2014) with the Bomber playing or training on Sunday mornings and the logistics of that tend to  rule a weekend trip to Wales out. He left for skiing with the school yesterday and will be in Austria tomorrow though, so I have to strike while the iron is hot.

I wonder how his party got on on the ferry last night? Chiggers and Over You by Seasick Steve may well have been on the soundtrack.
at 12:01 pm