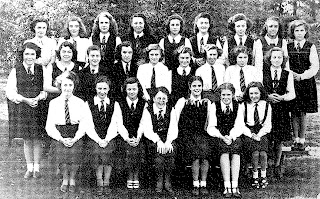 This school picture taken in 1948 shows Form 5 of St Joseph's Convent School, North Road, Cardiff. In the back row, second from the right, is Joanna O'Callaghan. She lived in Newfoundland Road, Gabalfa. Just a few years after this photograph was taken she became an actress and changed her name to Anna Kashfi. Moving to Hollywood she starred in films opposite the likes of Spencer Tracy and Rock Hudson. But more significantly she would marry the hottest male star of the era, Marlon Brando. Unfortunately their marriage was short-lived but the tortuous custody battle over their ill-starred son Christian went on for years. All that torment was still to come when this picture was taken - here she is just an ordinary and reasonably happy teenager living in Cardiff.


I went to St Joseph's Convent School in North Road myself. Just like Marlon Brando's wife. Who'd a thunk it?

Prodnose: I remember you were in trouble all the time.
Myself: Now you got me. Boy, the way those Sisters used to whack me, I don't know what. They thought they was gonna beat an education into me, but I foxed 'em.

Come to think of it, I remember my Mum telling me she know Bosco O'Callaghan; Anna's brother.
at 8:57 am