Every One a Winner 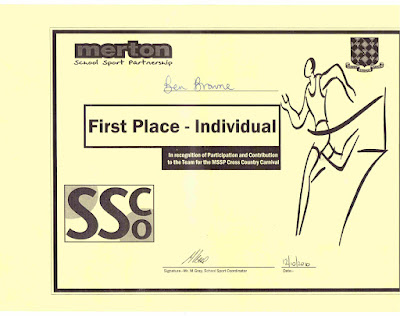 Seemingly operating on the same timetable and with the same diligence he applies to homework assignments, Ben has finally brought home the certificate awarded for last year's famous cross country win (see Icons passim).
In other sports news, everyone local thrilled to AFC Wimbledon's promotion on the weekend naturally. We listened to the penalty shoot out on the radio as Ben's mate Jonnie - who plays for the club's U10 - side was round the house. It seems that the promotion also makes the youth programme an official FA Academy. According to Jonnie this means that they get to play better teams; according to his folks it means that have to drive further to take him to matches, even though they are actually delighted.
at 9:25 am