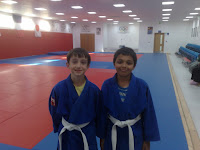 Kids Muay Thai has ground to halt because of problems with premises leaving something of a hole in the life of the bomber who has been doing it since 2006.
Cycling round the streets the other week however, I stumbled upon a purpose built dojo at Ernest Bevin College, and last night Ben and his mate Prashant bowled up for their first judo lesson which Ben in particular dug mightily.
Balance is restored to the universe. (I could discourse on how muay Thai and judo complement each other, but I might come over as some sort of psycho.)
at 11:25 am

I googled their teacher. Here he is.

I did judo myself when I was a kid, and actually pinned him down with kesa katami this weekend in anticipation.