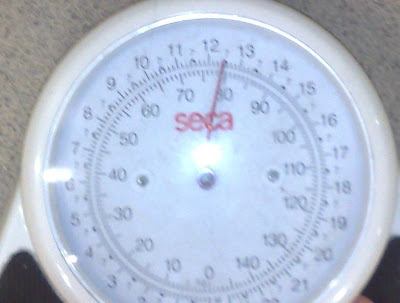 Accordng to the scales in Virgin Active, I met my own challenge yesterday, and that's good enough for me. I don't believe for a second that I actually weigh 175 pounds, but that is what the scales said after a lot of sweat so there you have it. I am a light heavyweight.

Next stop twelve stone (on the friendly gym scales rather than the accurate one at home).

Prodnose: The last time you weighed 168 pounds you were beautiful. You could have been another Billy Conn. And that Skunk we got you for a manager. He brought you along too fast.

Myself: It wasn’t him Prodnose it was you. Remember that night in the Garden you came down to my dressing room and said, ‘kid this ain’t your night, we’re going for the price on Wilson’. You remember that? ‘This ain’t your night’. My night, I could have taken Wilson apart. So what happens he gets the title shot out doors in a ball park. And what do I get, a one way ticket to palookaville. You was my imagination Prodnose you should have looked out for me a little bit. You should have taken care of me just a little bit so I wouldn’t have them dives for the short end money.

Prodnose: Well, I had some bets down for ya. You saw some money.