A terminally ill man who bared his behind to a speed camera van says he was "gobsmacked" to be arrested at home.

Darrell Meekcom, who was recently told he has multiple system atrophy, exposed himself at the van in Kidderminster, Worcestershire, on Friday.

He said he was forced to the ground during his arrest later the same day.

Wheelchair user Mr Meekcom, who has heart disease, kidney failure and Parkinson's Disease, said after his diagnosis he came up with a so-called bucket list of things he wanted to do before he died.

He decided to target the speed camera van on Stourbridge Road in his home town after he had been "caught by them a couple of times for silly speeds like 35mph in a 30 zone and it always bugged me".

"I didn't think anything of it," said the father of two, who added: "It was a good laugh."

However, the response took him by surprise.

"I was simply gobsmacked that I got arrested for mooning a speed camera," he said.

I can't help but admire Darrell Meekcom's chutzpah. Not sure that the police have covered themselves in glory here. 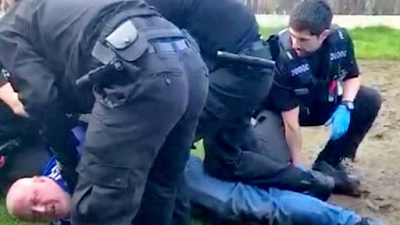