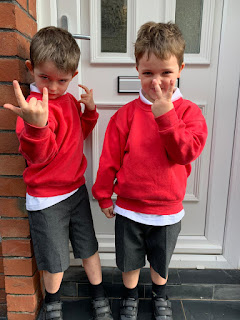 Dad, who died at 87, was the youngest in his family with four older brothers and three older sisters.

Auntie Nelly was the oldest. Peter, my Dad's cousin, was born in 1939. He was brought up in Tremorfa. There was an RAF camp that adjoined the house. His older brother Bernard told him that Auntie Nellie used to come round and "court" Bunny Churcher who was stationed there through the barbed wire at the bottom of the garden in the early days of the Second World War. They married but my uncle Bunny was killed in the conflict.

The two hooligans on the right are my youngest nephews. They have a little sister who is only one year old.

They are eighty years but only two generations away from Nelly. Alys may well have been born a century after her. If we were the Royal Family there would have been maybe a dozen monarchs at the most between 1066 and today.