Dad was with me twenty one years ago when Wales (playing at home in Wembley while the National Stadium was being redeveloped for the World Cup) beat England to rob them of a Grand Slam. Scott Gibbs' last minute try was the key though Neil Jenkins still had to convert it.

My brother reports, that years before:

I played against Gibbs in the Carpet Bowl cup final at the Taff's Well ground.

He kicked their first pen from the half way line then took no more attempts and they missed every other kick at goal.

Mike Young swallowed his tongue in a tackle and Christian Bishop's mum (a nurse) used two spoons to pull it out of his throat.

We won the cup and Mike insisted in being released from the hospital so he could have a drink and pics with the trophy. 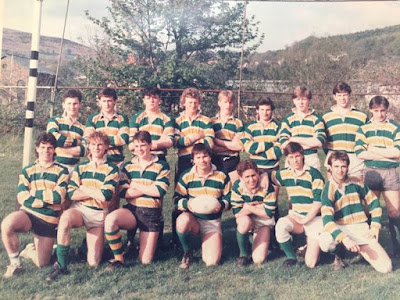