If you can wait and not be tired by waiting 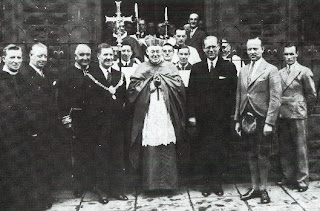 
American Ambassador, Joseph Kennedy, at St David's Cathedral, Charles Street, Cardiff, in 1938 (he's to the right of the Cardinal). He was, of course, the father of doomed golden boys of American politics, JFK and Bobby Kennedy. Joseph was in the city to attend the National Congress of the St Vincent de Paul Society, an international Roman Catholic voluntary organisation.

Interesting to me as I have very early memories of waiting around said Cathedral while my father was at St Vincent de Paul Society meetings after Mass on Sundays. After that we would be waiting for him in the car outside the boozer in Mackintosh Place if memory serves.
at 7:43 am