Josh Ozersky has probably hit the nail on the head as to why I am consistently about twenty pounds heavier than I think I ought to be in spite of hitting the gym pretty much daily:


........eating like a man is done with a zeal verging on fervor; with a blatant disregard for seemliness, propriety, or the established customs prescribed by spinster aunts and forgotten etiquette books; at the behest of primal urges, rather than curiosity or custom. It leans toward live fires and dead animals, and has no truck with tweezers. It bypasses amuse-bouches and skips dessert. A man will devote hours to making a dish he consumes in ten minutes. He never plays music when serving dinner, even to a woman, with the possible exception of “The Trooper” by Iron Maiden or “The Next Big Thing,” by The Dictators. He doesn't use food as an instrument of seduction or a means to an end; he considers it as an end in itself. He is not afraid of getting fat, clogging his arteries, or imprisoning free radicals. He barely knows he has a liver. He eats over sinks, and passes out on an unmade bed, if single, or with total urbanity, if married, but with equal ardor in any case. He never uses chopsticks, unless he is Asian. He doesn't boast about his love of bacon as if it were equivalent to a Bronze Star. He orders what he feels like. He eats for pleasure. He doesn't balance meals, or orchestrate course. He only stops eating when at the brink of death.

Did I tell you I bought Pitt Cue Co. Cookbook:Barbecue Recipes and Slow Cooked Meat from the Acclaimed London Restaurant?

I think the Man in Black would have understood. 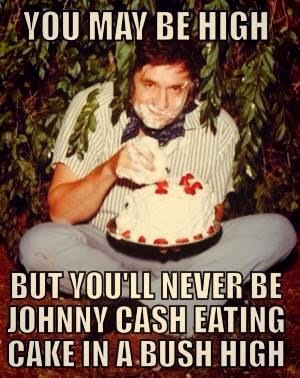