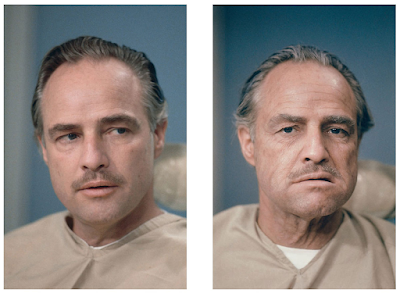 I googled Corleone yesterday as I wanted to book a table at this local restaurant so we could eat after the Six Nations game next weekend and came across the striking images of Marlon Brando's transformation into Don Corleone in the Godfather above. I always knew Brando was younger than the character but I had never realised quite how much.

It made me think again of Keisha Banya, the Hair, Wigs and Makeup Supervisor on 'A Number,' also being teacher of Mia's at Central. New respect from me for her job now. I never gave it a thought before.

I will definitely be going to the restored 50th anniversary version of The Godfather in a well equipped cinema when it is released next month.