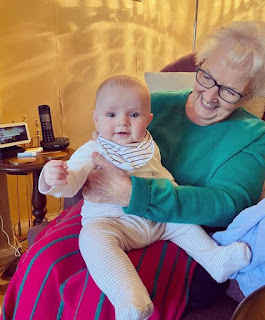 The details of the photo on the right, charming as it is, are inconsequential in this context. What stands out to me is an Echo Show next to the phone behind Aunt Philo and her first great grandson Ted.

It is coming up for three years (see Icons passim) since I speculated about getting one for my mum. I also noticed on a house visit that my old school friend Sean's mother has got one as well.

Here is what Philo's daughter - my cousin - said when I asked her about it.

It is an Echo Show, well spotted. We got Ma one during lockdown so that we could see as well as speak to her, Kate was in her bubble but the rest of us only had phone contact. This way, Vanny, Georgia and I could at least have daily face time without her having to do anything apart from instruct the echo to answer our calls. She now rings us too and gets weather and news updates and plays all her favourite old timers too.

Lily in Ty Enfys (who I respect enormously) is unconvinced by Alexa and older people and I take that on board but I wonder if Ria's slow burn might work for us. What if I get mum a show that is used initially as nothing more than a rotating photo album? After a month or two we could show her how she could listen to her favourite music on it. Later we could start "dropping in " on her and saying hello.

The jury is still out but it is not impossible.