The Midterms: What's it all about? 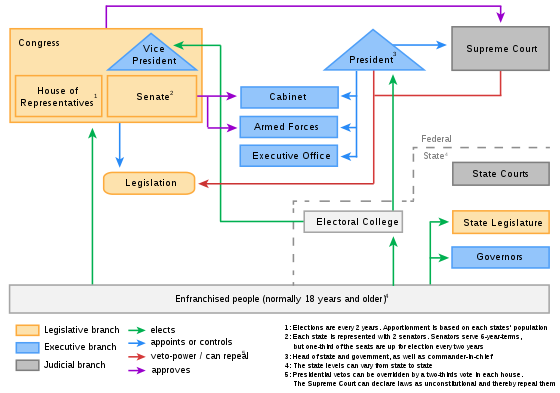 The United States Congress is the legislative branch of the federal government. It is bicameral, comprising the House of Representatives and the Senate.

The House currently consists of 435 voting members, each of whom represents a congressional district. The number of representatives each state has in the House is based on each state's population as determined in the most recent United States Census. All 435 representatives serve a two-year term. Each state receives a minimum of one representative in the House. In order to be elected as a representative, an individual must be at least 25 years of age, must have been a U.S. citizen for at least seven years, and must live in the state that he or she represents. There is no limit on the number of terms a representative may serve. In addition to the 435 voting members, there are 6 non-voting members, consisting of 5 delegates and one resident commissioner. There is one delegate each from the District of Columbia, Guam, the Virgin Islands, American Samoa, and the Commonwealth of the Northern Mariana Islands, and the resident commissioner from Puerto Rico.

In contrast, the Senate is made up of two senators from each state, regardless of population. There are currently 100 senators (2 from each of the 50 states), who each serve six-year terms. Approximately one-third of the Senate stands for election every two years.

The House and Senate each have particular exclusive powers. For example, the Senate must approve (give "advice and consent" to) many important presidential appointments, including cabinet officers, federal judges (including nominees to the Supreme Court), department secretaries (heads of federal executive branch departments), U.S. military and naval officers, and ambassadors to foreign countries. All legislative bills for raising revenue must originate in the House of Representatives. The approval of both chambers is required to pass all legislation, which then may only become law by being signed by the president (or, if the president vetoes the bill, both houses of Congress then re-pass the bill, but by a two-thirds majority of each chamber, in which case the bill becomes law without the president's signature). The powers of Congress are limited to those enumerated in the Constitution; all other powers are reserved to the states and the people. The Constitution also includes the "Necessary and Proper Clause", which grants Congress the power to "make all laws which shall be necessary and proper for carrying into execution the foregoing powers". Members of the House and Senate are elected by first-past-the-post voting in every state except Louisiana and Georgia, which have runoffs.

Congress has the power to remove the president, federal judges, and other federal officers from office. The House of Representatives and Senate have separate roles in this process. The House must first vote to "impeach" the official. Then, a trial is held in the Senate to decide whether the official should be removed from office. Although two presidents have been impeached by the House of Representatives (Andrew Johnson and Bill Clinton), neither of them was removed following trial in the Senate.

So now you know. That last paragraph explains a lot.
at 9:35 am