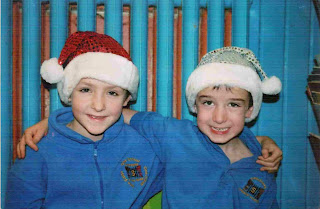 Ben's mate Jonnie came to Cardiff with us last week. He had an Outnumbered Christmas special and an episode called "The Tennis Match" on his laptop. They were hilarious. The Burglar has been recommending the show to me for years to no avail, but I am now officially a convert. (The tennis was filmed at the courts where Ben plays which added to the fun.)

I also managed to meet up with Sean (Icons passim) when I was back. He's extolled an American series called "Breaking Bad" to me, and I have to give it mad props as he's the small screen guru who tipped me the wink about The Wire three years ago.

The photo above shows Ben and Jonnie around Christmastime in their first year in primary school. They'll walk through the gates in the same secondary school in September, which reminds me that  Sean and I went through  De La Salle and then St Illtyd's together all those years ago. "Those Christian Brothers thought they could beat an education into us; I guess we fooled them," to paraphrase Terry Molloy.

Left to my own devices I watched "A Dangerous Method" last night  It is one of the worst films I have ever seen; the only fun to be had is in sniggering at how overwrought the whole sorry mess is. I am in dire need of any viewing steers I can get from B, J and S.
at 11:52 am