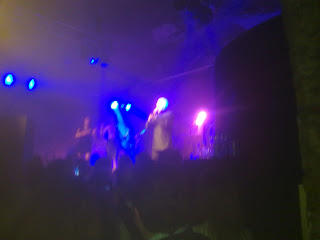 The image above is not the greatest photo ever taken, I'll grant you that. But it does prove that I saw Tom Jones in what was essentially a small sweaty club last night (Icons passim) and he was just as good as you imagine.

You may remember that Prodnose and I covered his first hit back in 2008. I can't help but think that if he returned the favour with Rizzle Kicks taking my part while he filled in for Prodnose, It's Not Unusual 2012 would be tearing up the dance floors again.
at 12:16 pm