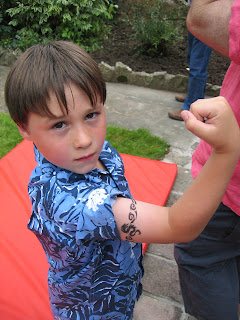 The New Ninja Bomber's cousin let it by known - via his Dad - that he would appreciate his own image and his own anagram on "A Welsh Born Icon", so Isaac - the Ace War Bison - appears above.

As if you didn't know, the tattoo isn't real. It is a temporary spray-on provided as part of the entertainment at the party at which the photo was taken. Given the bloodthirsty tastes of little boys, by the time they had finished selecting designs they looked more like the Aryan Brotherhood from San Quentin than the Little Lord Fauntleroys that we know them to be.

(P.S. With regard to the continuing saga of Penylan Well being under the kitchen, Vince has pointed out that Wellfield Road so called because it leads (or led) to the well field. Obvious in retrospect, though I would never have thought of it.)
at 9:00 am