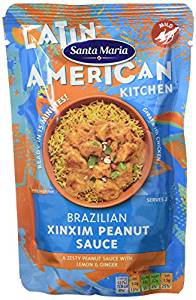 I cooked some chicken in the Brazilian xinxim peanut sauce on the right last night (special offer in the Co-Op) and served it up with boiled rice and some Amafil farofa pronta that I had in the cupboard. Very nice it was too.

A little research reverals the sauce is from Bahia which is one of the 26 states of Brazil and is located in the northeastern part of the country on the Atlantic coast.


Bahian cuisine, revered throughout Brazil as the country’s best, evolved from an improvisation of African, Indian and Portuguese dishes using predominantly local ingredients. These three cultures were thrown together by the Portuguese colonisation of Brazil in the sixteenth century and over the next 350 years a distinctive culinary culture developed around this nexus of influences.

This of course is exactly what Alexander Smalls et al are explaining with the "Afro-Asian-American" in Between Harlem and Heaven: Afro-Asian-American Cooking for Big Nights, Weeknights, and Every Day, the book John got me for my birthday this year. I leafed through it yesterday, and Bahia gets name checked on page 140.

Please also see my notes on vindaloo here. That post is nearly 14 years old!
at 2:31 pm